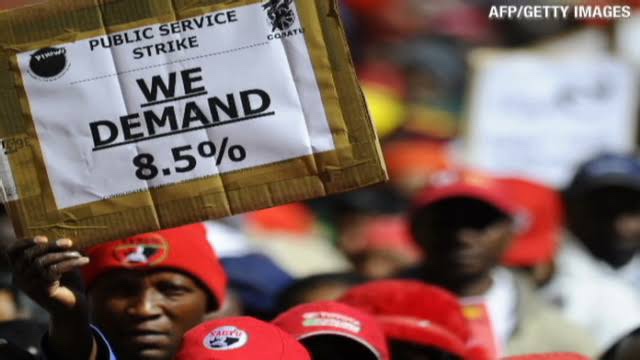 Government faces off with unions in court over wage increase agreement

Public sector unions affiliated to COSATU have taken the government to the Labour Appeal Court due to its inability to stick to the 3-year wage agreement that was signed back in 2018.

In the past 2 years, the government was able to implement the wage agreement, however, due to the COVID-19 pandemic, the government stated that it’s unable to meet its obligations due to financial constraints.

Finance minister, Tito Mboweni, warned that South Africa’s fiscus could collapse should the government continue with the wage agreement, since the pandemic affected the economy drastically.

“What the government and the South African economy cannot now afford, and what is not just and equitable under the current circumstances, is for civil servants to claim yet further inflation-beating and private sector outperforming salary increases off an already high base,” he said.

NEHAWU Advocate, William Mokhari, told the Labour Appeals Court that the government did not approach, nor attempt to renegotiate the terms of the agreement with them – which is highly unacceptable since they had no intentions of paying.

Unions argue that if the government couldn't afford the wage increases and agreement, they should've taken the strike (during the election year). Instead they chose to avoid a strike by agreeing to wage hikes and now can't deliver.

I wonder if it might have been strategically smarter for Treasury to bite the 2020 bullet rather than now having to go into the next rounds of negotiations off the back of a court case? Compromise will be difficult to come by. #publicwagebill

Currently, South Africa’s debt is predicted to peak at 93% of GDP in 2023/24, and the country may be spending almost 6 percent of GDP on debt service costs.

Alcohol sales, curfew and hotspot recommendations by the NCCC